Standing in the seedy parking lot of the downtown Planned Parenthood building, I steadied myself against my car, reeling from the life-altering news my 18-year old girlfriend had just confirmed.

Parenthood was not something either of us had “planned.” But Planned Parenthood had a plan. My girlfriend could go upstairs and “take care of the problem.”

The year was 1982, just nine years after Roe v. Wade made abortion a legal alternative. 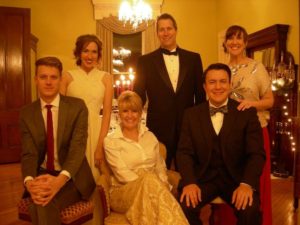 Ginger, the daughter that Planned Parenthood offered to exterminate, is top right.

Today, our beautiful, intelligent 35-year-old daughter and her husband, a Colonel in the U.S. Navy, visit us in our downtown Lexington home, just a half a block from that former Planned Parenthood building.

Needless to say, we are “pro-life.”

The Planned Parenthood office? It was still there when we moved downtown 25 years later, and we prayed when we passed by, often kneeling right outside on the sidewalk. God answered. It eventually moved, and they no longer perform abortions there. In fact, thanks to our godly Governor, Matt Bevin, and some shrewd pro-life lawyers, every abortion clinic in Kentucky currently has been shut down.

If you bemoan that fact, I dare you to finish reading this blog. Then do something that will take every drop of courage and every scrap of humility you can muster: change your mind on human abortion.

Between 1525 and 1866—roughly three and half centuries—12.5 million Africans were shipped to the New World.

Between 1973 and 2018—less than a half century—approximately 54 million unborn Americans have been aborted—more than four times the number of imported slaves.

When will this slaughter end? 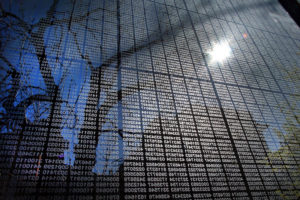 One of the most moving experiences I’ve ever had in my life is walking through the New England Holocaust Memorial in Boston. There for a wonderful weekend with our younger daughter and her husband, we hadn’t planned to visit it. We unknowingly ran across it as we were sightseeing in downtown Boston. I could hardly speak as I walked through it. Six glass towers rise up from smoldering pits below, each tower 54 feet high, etched with one million serial numbers, each number representing a nameless victim of the Holocaust. As I walked through tower after tower, the weight of the numbers crushed me. Oh, the humanity. All I could utter was a feeble, “No. No. No.” It was too much to grasp. 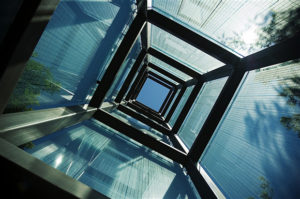 For six years (1939–1945), at six main death camps, six million Jews were exterminated. Six million is a number that can hardly be comprehended. But as the shadow of each individual number tattooed my skin, a small glimpse of the horror of each lost life came to light. 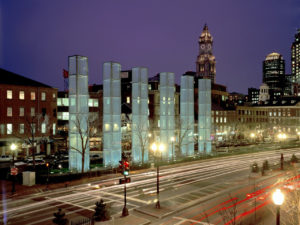 Twelve million slaves. Six million Jews. 54 million unborn children. How can one human do this to another? Abortion is worse than slavery. And it’s as bad as the Holocaust. Two of these atrocities have been condemned by an awakened society and civilized laws. One—the holocaust of human abortion—remains because too many lack the courage to stand up and say, “I was wrong to support it.”

2. Abortion is not a valid choice.

That’s wrong—and absurd—on so many levels, I hardly know where to start.

Science. First, the unborn child—from conception forward—is an individual being, distinct from the mother. Modern DNA evidence confirms this fact. The child has its own DNA, its own gender, its own blood type, its own eye and hair color, its own future. It all springs from conception. Any other arbitrary line is purely artificial.

Pass the buck: Law and logic. So, you don’t personally believe abortion is OK, but you’re willing to let a pregnant woman make the decision to end a child’s life? If you fall back on the “choice” argument, it’s a cop out. Let’s see how consistent you are with your logic. Is this same woman subject to seat belt laws? Yes? Then you’re not consistently pro-choice. How about laws against other self-inflicted choices? Drug use. Prostitution. Suicide. What about guns? Are you still all about choice? You better be prepared to throw out hundreds of other laws that regulate what an individual can do and can’t do—even if it affects only themselves. The choice argument is not consistent logically nor legally. Abortion is either wrong, or it’s right. It amazes me that otherwise intelligent people have actually conned themselves into taking this politically correct, morally horrific position.

God, history, and culture. I lump these together because the historic/cultural rejection of abortion is founded on the Judeo-Christian beliefs that God creates personhood in the womb. “For you formed my inward parts; you knitted me together in my mother’s womb” Psalm 139:13. “Before I formed you in the womb I knew you, and before you were born I consecrated you” Jeremiah 1:5. Every civilized society in history has recognized that the unborn child is sacred. God built this awareness into His creation. The United States Supreme Court cannot overrule God.

I know there are a hundred pragmatic arguments for continuing legal abortion. Just like they made for slavery. But those are issues that must be managed like any other societal problem. All that matters is doing what’s right to protect the unborn child’s life.

3. Abortion is a coward’s crime.

Who picks on someone smaller than themselves? And who stands up for someone who does it? Who murders innocent, defenseless lives, full of future potential? And who fights for someone’s “right” to oppress and exterminate?

I don’t primarily blame the women who get abortions. Most are under duress, underprivileged, and follow up one bad decision with another. I’m primarily talking about the people who say they personally believe abortion is wrong, but want to leave it up to the mother. That’s ignoring science, logic, and God. That’s not standing up for human rights. That’s not leadership. That’s fear of being politically incorrect. That’s pride in not admitting you’ve been wrong. That’s barbaric.

I set forth this public display of courage—albeit misplaced courage—as an example of what I pray would happen on the issue of human abortion. I’m waiting for a highly influential Democrat to stand up and say to their party, “It’s time to change. Abortion is wrong. We’ve been wrong. And I am changing my position on it.” Then we need another to stand, and another, and another, until the pro-abortion plank in the Democrat’s platform is firmly yanked out and fully replaced.

In the meantime, I will never vote for a pro-abortion candidate. Yes, I’m a one-issue, litmus-test voter. And I cannot understand how any believer or anyone else can vote for a person who supports the right to kill an unborn child. Would you vote for someone who still supports human slavery?

I yearn for the day when we look back at abortion with disbelief, as we now do slavery and the Holocaust, remembering it as an appalling relic in our history, an anachronistic artifact that seems out of place in a world that otherwise seems to be increasingly championing human and civil rights.

Who will have such courage? Who will be the Abraham Lincoln of abortion? It will take someone willing to put their political equity on the line and risk it all.

I pray it will happen in the church and my own family, too, where loved ones who claim to be believers still cling to the pass-the-buck, “let the mother decide” position, putting themselves on the slavery/Holocaust side of history’s most barbaric atrocities.

Who has the courage to stand and say, “I was wrong. Abortion is wrong. Let life live.”

That’s what one unmarried couple said in a parking lot in 1982. Now life lives. And oh, the marvelous humanity.

*This example is merely an illustration about how one man standing against the prevailing current can turn the tide of public opinion. Using this example is not my endorsement of homosexuality or same-sex marriage. I believe all sexuality outside one man and one woman married for life is sin.

The slave ship illustration at the top of this blog contains 215 unborn children, approximately the number who are shipped to slaughter every two hours—24 hours a day, 365 days a year—by abortion mills in the United States.

In honor of the the first person to contact me and say, “Reading your blog caused me to change my mind on abortion. I was wrong, and I now am pro-life,” my wife and I will donate $1,000 to a pro-life ministry.